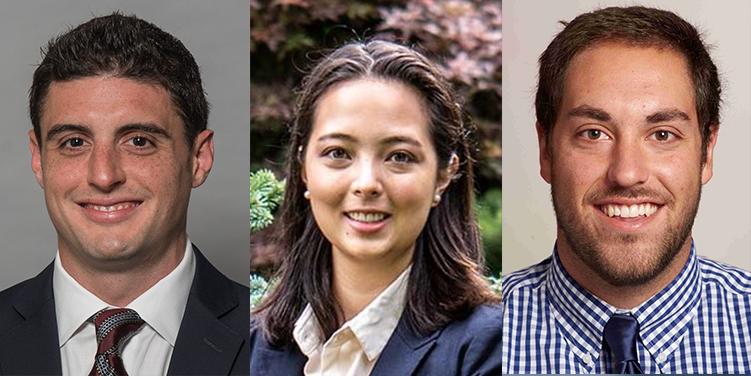 Zachary Abecassis graduated from Northwestern University’s McCormick School of Engineering with a BS in Industrial Engineering and Management Sciences & Economics in 2011. Before deciding to pursue medicine, Zack worked as a management consultant in the healthcare space analyzing complex processes in an effort to maximize procedural efficiency.  He will graduate from the Feinberg School of Medicine at Northwestern in May.  In 2017, he received a Howard Hughes Medical Institute (HHMI)-Parkinson’s Foundation (PF) Medical Research Fellowship Award and in 2018, an Alpha Omega Alpha - Carolyn L. Kuckein Student Research Fellowship Award.

Malia McAvoy, a native of Washington and USTA ranked tournament competitor, earned her combined BS/MS in Biochemistry with highest honors at Brandeis University.  She will graduate from Harvard Medical School in May.  In 2011, Malia was a Howard Hughes Medical Institute Biology fellow at UW. She was inducted into the Phi Beta Kappa Honor Society in 2015 and, in 2018, received the Shucart Medical Student Paper Award from the New England Neurosurgical Society. Malia served as President of the AANS Harvard Medical School Student Chapter from 2016 to 2017 and is currently Medical Student Chair on Women in Neurosurgery’s Executive Committee.

Dominic Nistal received his Bachelor of Arts degree in Neuroscience at The Johns Hopkins University.  Upon graduation, Dom spent a year as a corps member for City Year Boston tutoring and mentoring eight underperforming fourth grade students, providing whole classroom support and after-school tutoring in math and English. In May, he will graduate from the Icahn School of Medicine at Mount Sinai where he received the Neurosurgery Scholar Award and developed a multi-institutional protocol for the collection, analysis and interpretation of ischemic and hemorrhagic stroke clots.