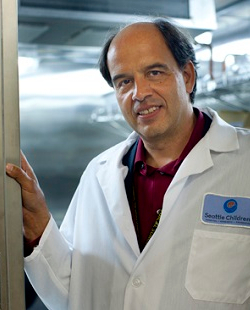 Jan-Marino Ramirez is a Professor of Neurological Surgery. He is also Director of the Center for Integrative Brain Research and a Principal Investigator at Seattle Children's Hospital.

Our studies focus on understanding the neuronal basis of a variety of brain functions to find novel ways to treat and cure neurological disorders in children, including epilepsy, Rett syndrome, brain tumors, and sudden infant death syndrome (SIDS).

With the introduction of molecular approaches into the field of neuroscience an unexpected variety of receptor and ion channel subtypes have been discovered that are developmentally regulated within the central nervous system. The relevance of these findings for the function of neuronal networks is still unclear. In a close combination of studies at the cellular and systems level our laboratory examines how diversity at the cellular level may lead to ontogenetic changes at the network level.

Over the past decade we have analyzed cellular mechanisms in neuronal networks that generate rhythmic motor activity in invertebrates and vertebrates. Our current work focuses on the analysis of the in vitro respiratory network in mice. For this purpose we isolate acutely the respiratory network in a transverse plane of the mouse medulla. This brainstem slice preparation contains the essential medullary structures involved in cardio-respiratory control and even after the in vitro isolation generates rhythmic activity in rats and mice of all developmental stages (up to an age of 25 postnatal days). This approach permits a direct comparison of the neuronal mechanisms of rhythmogenesis in newborn and more mature mammals. Our experiments indicate e.g. that the hypoxic response, fast chloride mediated inhibitory synaptic transmission, calcium channels and modulatory processes change postnatally within the respiratory network.

In order to analyze the cellular mechanisms in rhythm generating neural networks we employ the currently available electrophysiological and immunohistochemical techniques. The great advantage of the brainstem slice preparation is that single neurons can be visualized that are embedded in a functional neuronal network using infrared-Normarski optics in conjunction with upright microscopes. Thus, voltage-gated and synaptic whole cell currents, properties of single channels as well as second messenger pathways can be investigated in a functional context to characterize changes in postnatal development of the respiratory network. Our laboratory is particularly interested in understanding developmental alterations of cellular properties involved in the response of the respiratory network to hypoxia. This response elicits a cascade of molecular events which are regulated by endogenously released neuromodulators such as substance P and endorphins and which result in a reconfiguration of the respiratory neuronal network.

In the future this slice preparation will enable us to further obtain systems and cellular data from functionally identified respiratory neurons. In combination with cell culture and modern molecular techniques (e.g. expression of channel subtypes obtained from respiratory neurons in oocytes) we expect to gain new insights into principle mechanisms of respiratory rhythm generation and the hypoxic response in mammals. Due to the importance of the respiratory system for the survival of any mammal, progress in this field will not only have important scientific, but also clinical implications (e.g. understanding the underlying causes of sleep apnea, periodic breathing, Pickwick syndrome and sudden infant death syndrome "SIDS").