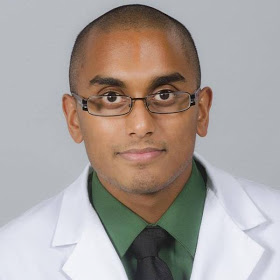 Sanan was born in Toronto, Ontario but grew up in the suburbs of Pittsburgh. He went to the University of Pittsburgh for his undergraduate education and majored in Neuroscience. While there he worked for the UPMC Department of Neurosurgery in a research capacity, under the mentorship of Dr. Juan Carlos Fernandez Miranda, working on skull base cadaveric dissection and high definition fiber tractography. He then went on to the University of South Florida for medical school where he continued research efforts in the field of Skull Base Surgery, working with Dr. Harry van Loveren, Dr. Siviero Agazzi, Dr. Fernando Vale and Dr. Puya Alikhani. While in medical school he also published in Dr. Greenberg’s Handbook of Neurosurgery. He started his neurosurgical training at the University of New Mexico, first as an unaccredited pre-residency fellow and then as a resident, before joining the University of Washington in his R2 year. His personal interests include playing Ice Hockey and following the NHL, a wide variety of outdoor activities (hiking, camping, paddleboarding, skiing, etc...), traveling and playing with his Shiba Inu.

Neurosurgery Editor’s Choice and Journal Club Selection: Surgical Management of Trigeminal Neuralgia: Use and Cost Effectiveness from an Analysis of the Medicare Claims Database”

Clinical Commendations: Given to students receiving the highest clinical evaluations during the 3rd year clerkships

Steven Specter Award for Outstanding Contributions in Scholarly Achievement and Advancement of Medicine: Awarded to the student in the graduating class who “demonstrated exemplary research achievements in any field of medicine”

Senior Student Award for Neurology and Neurosurgery Research: Awarded to the student in the graduating class who demonstrates excellence in research in neurology and neurosurgery

Sanan’s clinical interests encompass the whole spectrum of neurosurgery including Complex and Minimally Invasive Spine, Brain and Skull Base Neoplasms and Sports Neurology/Concussion.

Sanan’s primary academic pursuits are in clinical studies of minimally invasive spine surgical techniques and in the study of adolescent and adult sports concussion.